This lovely small wooden cutter sailed in to the anchorage late yesterday with one older man on deck. I caught these as she ghosted out this new year's morning, with hardly a whisper of wind to push her along.

Posted by Chris Bennett at 11:13 AM No comments:

Best wishes to everyone who is reading our blog for a healthy and prosperous 2014!

On New Years eve, I rigged the little sailing dinghy and went for a voyage around the two local bays. I counted around 60 boats in the bays and more people in the 'bach's' (summer camps) that huddle under the shadow of the hill one bay over. Ironically, our friends sailing in the Bay of Islands tell me that the crowds we sought to escape did not materialize. Perhaps everyone came up here instead.

After the sail, I picked up Angelina and Natalie from 'La Fiesta' while David relaxed, after scrubbing their boat's bottom, by assisting another cruiser with engine troubles. We landed on a sand beach at the head of the bay and followed a lightly used trail to a rocky lookoff.


I did not bring the camera to the New Years eve celebrations that we held on the beach and then later on board Kamali'i (pictured below). All my friends from the boats around showed up and we saw in the New Year with NZ bubbly courtesy of Matthew on 'Rock and Roll Star'. Kamali'i is a Philip Rhodes design built, for the grandson of an oil baron. She was constructed to the highest standards and, being 75 feet long and weighing as many tons, is more a ship than a boat. I have a great deal of respect for the new owners who rescued her from an early retirement in California. She makes a lovely addition to any anchorage and apparently sails along very comfortably at 10 knots. Her owners, James and Sharon are also friends with our friends Rob and Jo from 'Blue Moon', so we will probably sail south together to meet Blue Moon in the Bay of Islands.

Posted by Chris Bennett at 10:42 AM No comments:

I have been up and down the 'Nose' three times - once on my own, once with Angelina, David, and Natalie from La Fiesta, and once with Jan and Rich from Slip Away. The trail is steep and eroded and there are chains at the top to make ascending the last piece of rock face simpler. A few pictures follow.

Ladybug is still anchored in Whangaroa where we have had a day of rain (I have newly laundered clothes to prove this) and some gusty winds that saw several boats drag and re-anchor last night.

On Christmas day, another Coast 34 - style boat (actually a custom built version called the Roberts 341) anchored next to Ladybug. Jason and Maria are about to embark on an extended voyage with their two boys Luke (9) and George (11) on "Allure of New Zealand". The boat was 27 years in the making. A previous owner built the hull and partially fitted out the interior starting in 1985 and spanning 20 years. Jason has spent a good part of the last seven years finishing off the interior with a diesel engine from a tractor, drawers and cupboards, a liner for the ceiling, and electronics and electrical systems. He has also welded up all the metalwork on the exterior and rigged her as a cutter. She is lovely inside, finished in various blonde NZ woods and teak with a very nicely built hull. Even though her original construction dates from when Ladybug was born, she was launched last year and looks brand new.


I also came across this lovely wooden schooner while on passage to Whangaroa. I believe she does day charters out of Paihia. 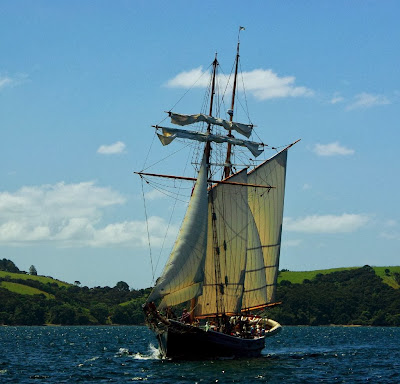 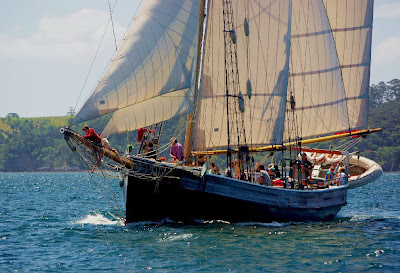 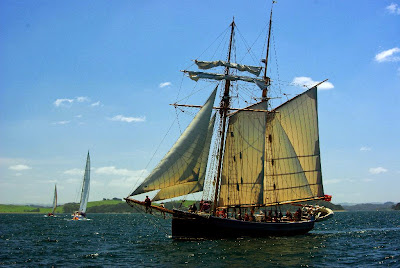 Posted by Chris Bennett at 11:03 PM No comments:

I just received a Christmas email from friends on the big aluminum sailing boat, Papillon (butterfly in French). We first met these folks in Tonga and again in New Caledonia where Erik helped us re-rig our forestay and repair our roller furler. In their email, Papillon included a link to their blog, which is both very funny and insightful. Erik and Amy cruise with their two lovely children, Audrey and Martha. Check out their blog at http://sailingawayonpapillon.blogspot.co.nz.

Posted by Chris Bennett at 12:02 PM No comments:

After swimming three times with the dolphins, I was chilled through and through, so what better way to warm up than to row ashore, lug the dinghy up the beach and walk across the biggest of the Cavalli Islands. The trail ran from the beach northeast of North Bay, climbed up through some grasslands and then followed a ridge before plunging into a forested valley. In the trees, the trail crossed a couple of small streams before rising again to another ridge with views to the north and out over several valleys that converge in the center of the island. The terrain is rugged on this trail and I cursed the trail makers for not keeping the trail high and following a single contour along the hillside.

The views into the center of the island are particularly lovely with little noise from the outside world to compete with birdsong and insect calls. The views along the ridge of the other Cavalli islands are also worth the climb.


At the other end, one descends to a hut that can be reserved through the DOC office in Kirikiri. The hut enjoys views out over an expansive beach to the mainland hills. I traipsed the beaches on the inland side of the island, finding a few abalone shells scattered at the high tide mark. On the return trip, I took a side trail to a look-out at the highest point on the island before retracing my steps to the dinghy.

Posted by Chris Bennett at 10:28 PM No comments:

I had the most amazing experience in the north bay of Motukawanui
Island (the largest of the Cavalli Islands). A pod of dolphins arrived
in the bay shortly after I anchored and spent the next couple of hours
swimming around the bay staying close to Sueno, a Canadian catamaran
anchored closer to the beach. I got in the water and swam with the
dolphins when they came over to visit Ladybug. These are the largest
dolphins I have seen and were quite curious, calling and whistling,
jumping and even walking backwards across the water using powerful
thrusts of their tails. There were two or three calves and the whole
pod numbered about 12. Following are some pics mainly underwater but a
few taken from water level at the surface. 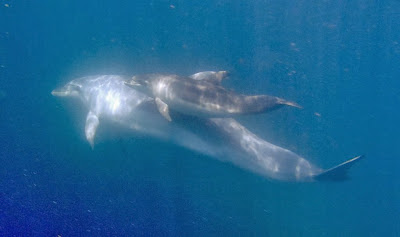 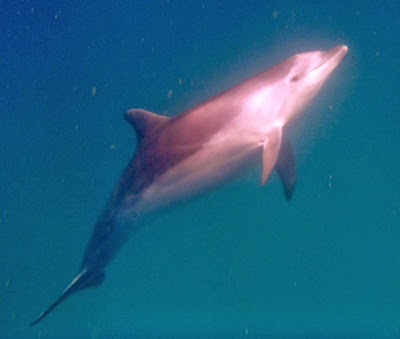 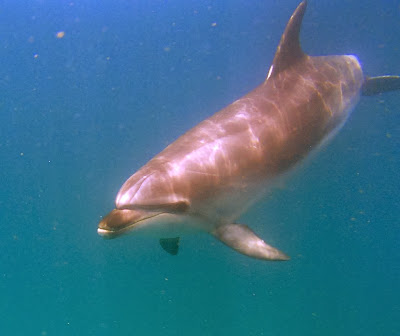 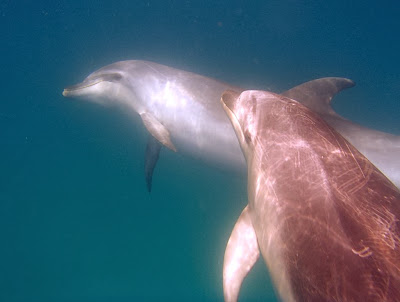 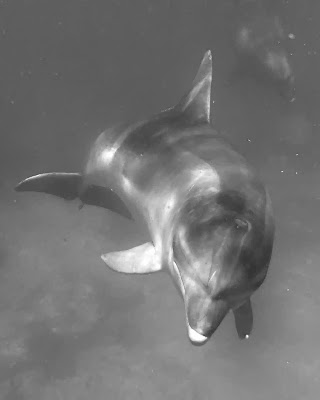 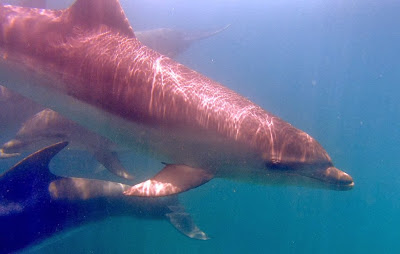 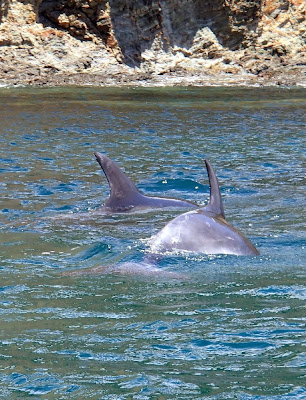 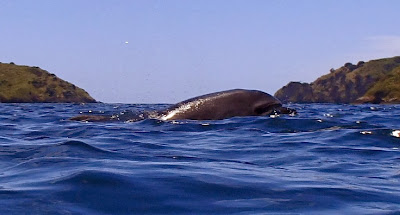 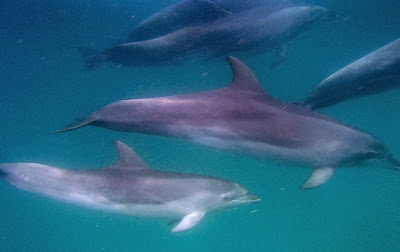 I left Opua yesterday just as the tide began to ebb, coasting down the channel under jib alone to the open beach anchorage off the town of Paihia. This tourist resort has a Countdown grocery store on its outskirts that promised cheaper provisioning than the smaller stores in Russell.


It turned out to be a good long walk through the town and out the other side to the store and an even longer walk back with 2 weeks of groceries including some chicken for my slightly non-vegetarian Christmas dinner (sorry Rani - your good influence is wearing off already as far as my bachelor diet goes). I walked the row-boat end for end down the beach, loaded the groceries, and rowed back to Ladybug, stopping to chat with Paul on Trumpeter, a local cruiser whom we had seen in Fiji earlier in the season. Paul told me I was a silly sod and could have anchored much further down the coast if I had sailed around a set of islands that fill the bay. This would have put me much closer to the store. I had already noted this fact on my long walk in but we had an amiable chat anyway.

Once the groceries were stowed, I pulled up the hook, again under jib alone, and sailed dead downwind for the north entrance to the Bay of Islands, marked by a giant shark tooth rock named 'Ninepin Rock'. A lovely schooner crossed our bows at one point and several yachts criss-crossed the bay on their way to anchorages at Kerikeri and among the islands. As I passed between the rocky coast and the shark's tooth I left all this activity behind and entered a different world, turning west and sailing along a coast of rocky cliffs capped by green rolling pastures. The wind blew steadily off the land and the lowering sun reflected off a million wavelets like so many jewels.


I had left Paihia around 2pm and was concerned I would not reach a safe anchorage before dusk at my sedate pace, so I hoisted a reefed main and was soon bowling along at 6-7 knots, the wind building and turning into the south west. I passed only one other boat - a small but speedy coastal cruiser hugging the cliffy shore for shelter heading for the Bay of Islands. A little further on I began to pass through rafts of sea birds resting on the water as Ladybug drew abreast of the Cavalli islands.

Shortly before 7pm, I furled in the jib and dropped the hook using the mainsail to coast into a small indentation on the Purerua Peninsula known as Orokaraka Bay. This bay is well sheltered by the cliffs of the peninsula and has stunning views of the Cavalli islands, which form a protecting ring to the north and east.

I have had a few hikes on Urupukapuka island in the last 2 days. This is a large island that was once home to hundreds of Maori. There are archaeological sites all over the island including deep storage pits for the sweet potatoes they once grew here and Pa forts, guarded by defensive ditches. The oldest site dates from about 1340 but most have been built upon several times over the 600+ years of occupation. The island has trails all around its coast and the terrain is extremely rugged particularly on the north and east sides with drop offs of a few hundred feet.


DOC maintains the island and I met a warden who was patrolling with his terrier rat/mice dog. The island is pest free now, but they have had 4 incidents of introduced pests in the last few years. The terriers they use are crosses that are good ratters but also amenable to training, since the dogs and their trainers are involved in both public relation and extermination exercises. Apparently they have done genetic testing to determine that the rodents on the island have all come from the nearby mainland probably swimming over via the 'Stepping Stone' islands. Norway rats can swim kilometers and there are only a few hundred meters between these islands. DOC also maintains a network of baited rodent traps. Other rodents, such as mice, have likely stowed away in tents and come ashore at the campground on the east end of the island.

I am finally getting around to posting a few pictures from our first week in New Zealand. Some of these are from Russell where we spent the first weekend visiting with Roz and Holger who make their home here on board Melody when they are not at their farm near Whangarei Heads, 'Home Port'. Others are from Home Port and the last few are from Roberton Island in the Bay of Islands where Ladybug is currently anchored.


I
Posted by Chris Bennett at 1:56 AM No comments: