17 days in the Southern Sea of Cortez 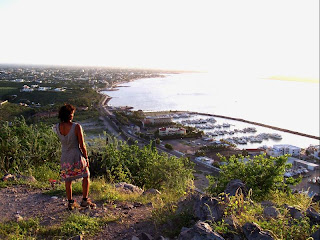 Rani looks out over Marina Palmira where we kept Ladybug during the Hurrican Rick scare.

La Paz is a superb base from which to explore the dozens of islands and coves in the south western Sea of Cortez. Epiritu Santo and Partida islands lie across the San Lorenzo channel from La Paz. They are very popular with kayak tours and diving charters due to their many coves, sand beaches, rocky points and islets teaming with underwater life. We spent several days in these islands, which in the spring we had only briefly visited due to having to get back to Ladybug I in Mazatlan before hurricane season. 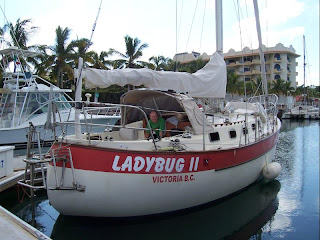 Ladybug II in the marina in La Paz. 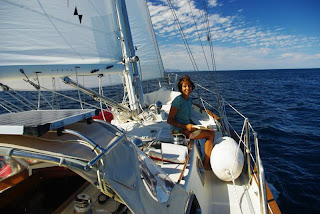 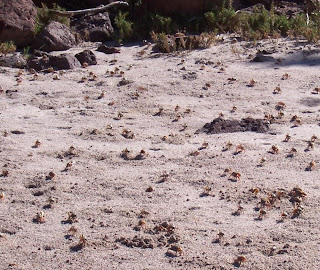 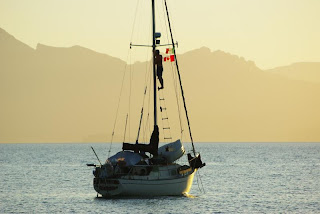 Another Canadian cruiser inspects his rigging.

Because there had been recent rains, there was a profusion of wild flowers in the arroyos and canyons that we hiked. We also saw lots of wildlife, including two rattlesnakes on one hike and a black and grey snake on another. The first rattler we saw was in a cave that looked big enough to house a small community of stone age people. The rattler was tucked into an indentation in the dirt in the middle of the cave and, had it not moved, it would have been virtually invisible. At a beach in the bay that divides the two islands we disturbed hundreds of little crabs that live in holes in the sand and hiking up a canyon from that beach lizards ranging from 1 inch to a foot long scuttled out of our way. 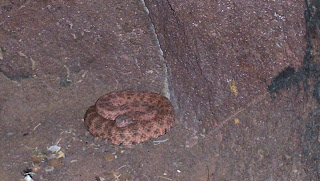 Rattle snake in a cave on Isla Partida 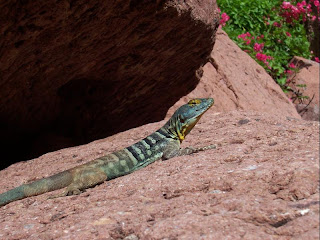 We spent a lot of time in the water both to cool off and bathe as well as for the fish-watching. The water is between 70 and 80 degrees fahrenheit and there is no need for a wet suit, yet. We had bought a guide to Pacific coast fishes​ in La Paz and put it to good use here. Some of the fish we see regularly include King and Cortez Angel fish, Mexican Hogfish (so named for their foraging habits), irridescent green parrot fish, damsel fish, and Panamic green moray eels (including one that must have been four feet long!). In some places where there was more current we swam through schools of dozens of brightly coloured fishes – especially Panamic seargent majors and yellow tailed surgeon fish. I can see why Jacques Cousteau loved this place! 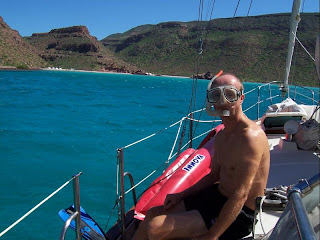 Snorkeling off the boat - the inflatable kayak is on the deck. 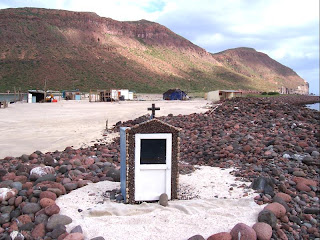 Shrine to the virgin of Quadalupe on the beach beside a small fishing village.

We have not launched our rubber dinghy this year, instead using our inflatable double kayak to get to and from shore. This boat is easy to paddle in a wind but due to splashing we usually wear our bathing suits an change on shore. We have also snorkelled off the kayak, anchoring it with a rock tied up in a plastic bag. It is quite easy to get back into the kayak due to it's width. The last time we used this boat was in Barclay Sound back in Canada, so I am happy we are finally getting some use out of it! 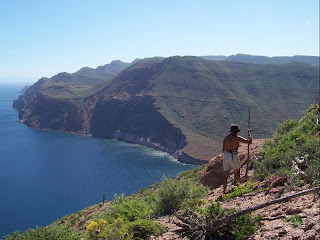 Stunning scenery on the east side of Espiritu Santo 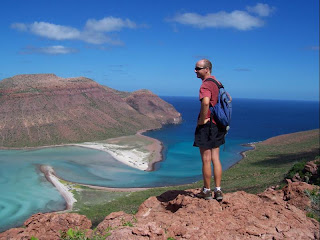 View over the Caletta Partida anchorage. For some reason there were mosquitos up here, so even paradise has its serpents... 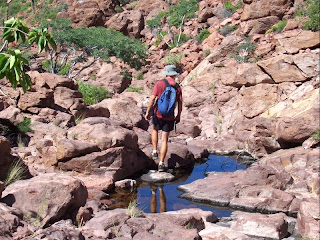 Because of the rains, there was still some water in the canyons. 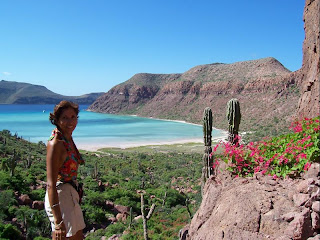 The red flowers are on a vine that sometimes climbs the big cacti. 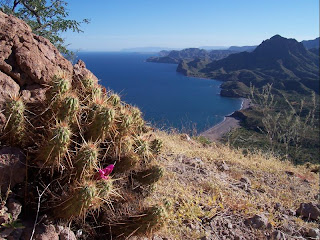 Cacti over an anchorage south of San Marcial. This was a steep hike and the rocks were very crumbly. Rani was cursing me as we struggled to get down to our boat (she spent most of the descent on her backside!)

After a week out, we reprovisioned at a small shop in village of San Everisto and continued north to some of the anchorages we had visited in the spring including Los Gatos. We also tried out some new ones, anchoring in a cove just north of Los Gatos, off a beach south of San Marcial point, and, last night, in a beautiful cove on Monserrate Island. 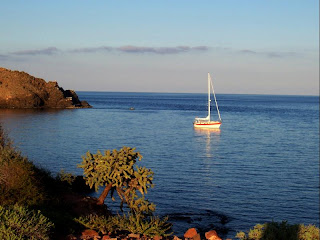 At anchor north of Los Gatos 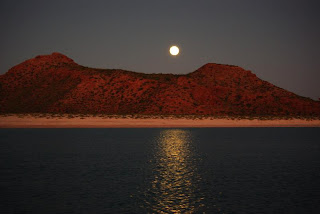 Moon over San Francisco island (the no-see-ums were out in force here, so we missed out on a great hike along this ridge that we had done back in April).

We have Gary and Beth on board their little sailing boat, 'Speck' to thank for introducing us to some of these new anchorages. We met this Oregon couple while sailing from San Everisto. Gary and Beth sail in the Sea each year for a couple of months on a lovely 23 foot Montgomery, which lives on a trailer in La Paz for the rest of the year. They have a stained glass business back home, but are planning to retire to San Juan island, just across Haro Strait from Victoria, in a few years. One day we swam over to their boat and were invited aboard for an impromptu dinner and rum punch. The next day they tried out our vegetarian chilli and fresh baked bread on board Ladybug. After more than a week in each other's exclusive company, we were happy to spend some time socializing with other boaters! 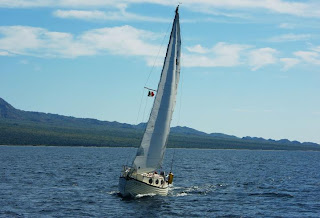 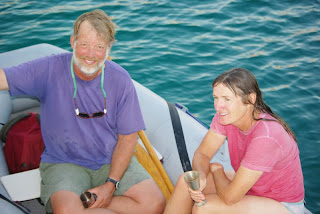 Gary and Beth drop over for a visit (Beth swam over)

We plan to head further north for another couple of weeks possibly as far as Santa Rosalia and then turn south and make our way slowly back to La Paz. 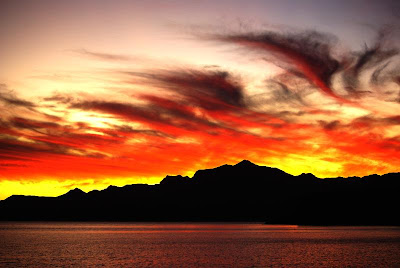