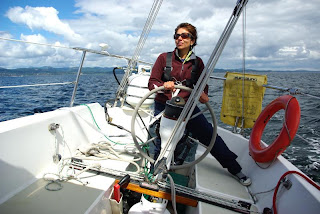 We are in Ucluelet, having spent a week in Barkley Sound. The overnight sail from Victoria began well with moderate Souherly winds and light seas. The wind died down gradually and as we neared Port Renfrew it died altogether, although the swell was substantial. The mainsail slatted back and forth filling as we reached the tops of each swell. A preventer to hold the boom out helped, but the small rope lashing I made up soon chafed through. We will make a better preventer with a pulley for remote adjustment and lead this back to the cockpit, prior to our departure for Washington. To avoid a second night at sea, we put the motor on off Pachena Point and let the autopilot guide us along this rugged coast, with the world renowned west coast trail to starboard. Rani appears to be immune to seasickness, working away below quite happily. She even stitched some skillful patches on our aging mainsail and wheel covers.

We spent a couple of days in Bamfield with a memorable hike to Brady's Beach and its stunning sea stacks, plus some much appreciated showers at a nearby campground. Next we crossed Imperial Eagle channel with a lovely breeze on our beam to reach Effingham Island. The bay at Effingham is the most popular all weather anchorage in the Broken Group, although we shared it with only a few other boats during our two day stay.

The next day, we inflated our double kayak and paddled to the outside islands named Wouwer ad Howell. About 50 sea lions bellowed and grunted on the offlying rocks between these islands. We paddled along the inside of Wouwer, landing on a sand beach where I had landed the year before with my friend Ian and his son Kevin. Sea lions were conversing on the small island just off this beach and the weather was pleasant with some sun to warm things up. Passing through a ribbon of old growth forest, we hiked a volcanic landscape to the sea swept outside shore of Wouwer, contemplated a dip in a particularly deep tide pool, and settled for some sunbathing on a shell beach that was sheltered from wind and spray. One of the best things about the Broken Group is its diversity in such a small space, and Wouwer's rugged beauty is a stark contrast with the softer lushness of the inner islands.

Our next destination was Joe's Bay on Turtle Island. Rani and I practiced our navigation skills to weave a course between the rocks and islets of the 'Tiny Group' – a miniature island group nestled within the Broken Group. We sailed under mainsail alone with Rani on the foredeck scouting for rocks, anchoring in the lee of Turtle island a few hundred feet from an attractive American cutter. We paddled the Helios double kayak around the sheltered lagoon formed by Turtle and several other islands, finding several types of sea stars as well as a canoe run (a cleared rock lined channel) leading to an abandoned Indian Village. The following day we paddled across to Turret Island where there is a fish trap and an impressive cedar. The scramble along the coast from where we landed to the cedar was extremely taxing and made us realize how dependent the indigenous people must have been on their canoes. On the way home we had some exciting paddling and a little dissent in the ranks when I insisted against Rani's better judgement to paddle through a rocky and foam filled pass betwee two Islands. The Helios handled the white water and to her credit, Rani paddled like an olympic champion to get us through and into safe, if somewhat turbulent waters on the other side. My penance for this was both to make supper and do all the dishes...

The trip to Ucluelet was exciting with winds gusting beyond 25 knots. Despite carrying only a small jib and reefed main we dipped the rail in a couple of gusts producing some interesting sounds from the first mate. A nice meal at an Italian restaurant gave us time to discuss the day's events and mentally prepare for our departure today.
Posted by Chris Bennett at 10:12 AM No comments:

We are in Victoria doing some last minute errands (such as buying an EPIRB and fixing the SLR camera) before heading around the corner to Barclay Sound. The sail down from Maple Bay was relaxed and we visited with Jitka at Cherry Point and stopped in Sidney to collect our recut cruising Spinnaker from UK Halsey sailmakers. The weather has been mixed with plenty of rain and south east winds - things should clear up on Thursday (tomorrow) when we plan to sail for Sooke.

A few pictures from the last 2 weeks... 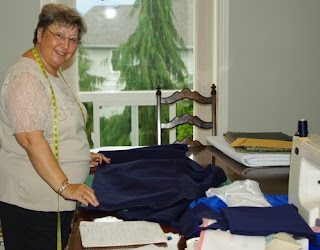 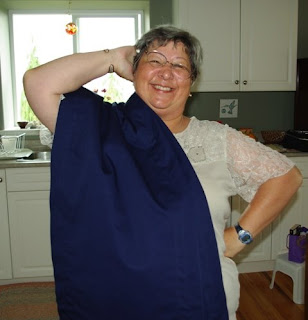 Joanne and A Finished Curtain 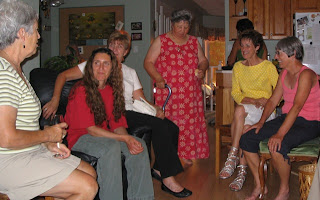 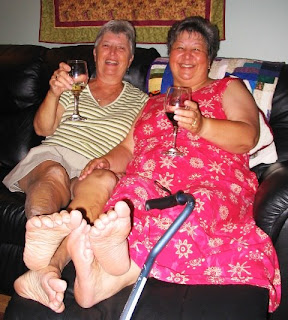 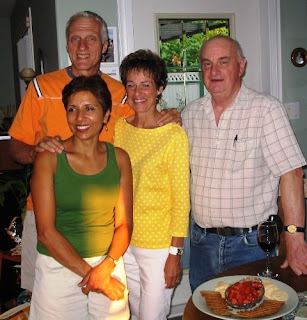 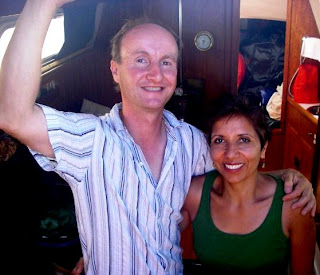 First Day on the Boat - Thanks Jitka for the Photo! 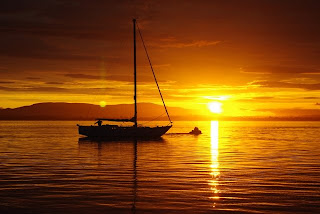 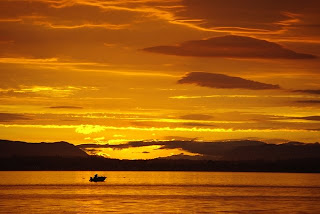 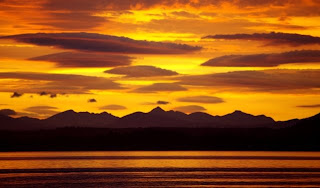 And yet more Sunset at Sidney Spit
Posted by Chris Bennett at 5:00 PM 3 comments:

We are now less than a week away from our departure date, which has shifted to Sunday, August 17 for various reasons. It has been a hectic week of packing a well furnished 3 bedroom house into a small bedroom and crawlspace, sorting through clothes to select from 3 bedroom closets what will fit into 2 rubbermaid containers, and working on various boat projects. 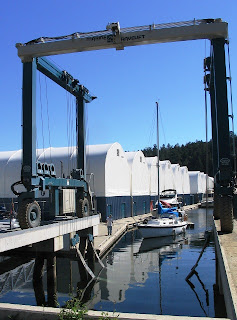 We hauled out Ladybug and cleaned and painted her bottom, raising the waterline an inch to allow for Rani's stuff and additional stores for the trip. We waxed her sides and changed the fluids in the outboard. Although there was not much growth after 16 months in the water, her speed under motor increased by 2 knots at the same RPM! It will be critical to keep her clean on the trip and we will be doing a fair bit of in-water cleaning using a snorkel and mask. 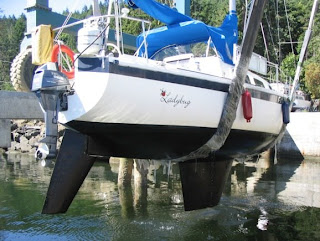 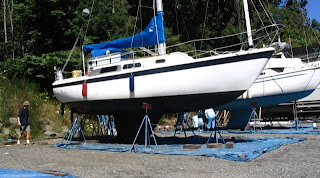 We also learned another valuable cruising skill - how to cut each other's hair. See below for some before and after pictures. Our friend, Joanne Rife, was in control (and fixed our mistakes), explaining how to achieve a layered cut, where to leave hair fuller, and how to thin - just using a comb and scissors. We will try a small trim again this week. 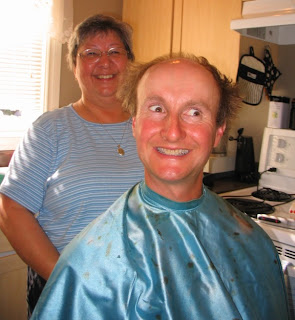 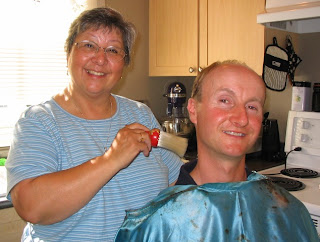 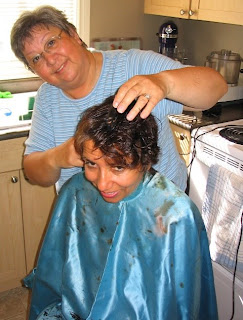 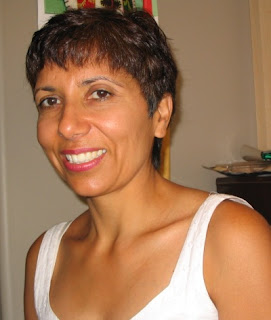 Other projects completed this week include curtains (again our friend Joanne came to the rescue and helped us sew these) and installation of the autopilot. The missing wheel clamps for the autopilot arrived from the UK and installation took only an afternoon. We have also managed to squeeze in a couple of hikes, a swim in the Cowichan river, and a morning at the opening ceremonies of the Indigenous Games... 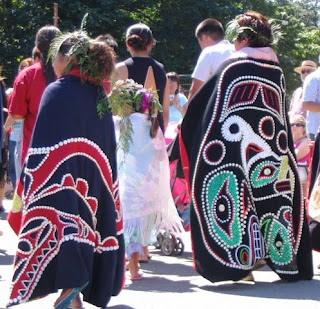 In the Cruising Mode 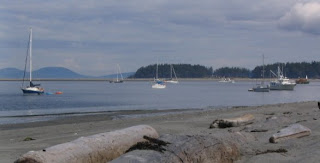 Last week on the way to the Cal sailboat rendezvous at Thetis Island, I finally started to get into the cruising mode. Despite there being much to do before we head south, the constant flow of jobs on the boat has slowed to a trickle and I can now relax and enjoy things. Lights winds and a change of tide around 10 am put Ladybug at Discovery Island, where I anchored off the abandoned coast guard boat shed. I hiked the trail to the lighthouse and campground beyond, snacking on some early blackberries and photographing the shoreline and passing ships. The shallows between Discovery and the Chatham Islands were full of seals including mothers with their pups. The babies nuzzled the mothers for reassurance as I rowed by in Little Bug'r (Ladybug's tender). Around 2pm, the ebb current had slowed enough to resume sailing and Ladybug drifted slowly to Sidney Spit where I dropped the hook at dusk - about 12 hours of sailing and 20 minutes under motor.

The next morning, Alex from UK Sails met me at the Port Sidney marina to take my spinnaker in to be recut as a cruising chute - this will be much easier to use than the present racing configuration, and does not cost that much. I then sailed to Maple Bay, dodging ferries and navigating Sansum narrows with a light following wind. Rani came on board at the public jetty and we sailed to Kuper Island for the night and then on the next day to Thetis Island marina where the rendezvous was being held. There were nearly 20 Cal and Crown sailboats ranging from a 23' Crown to a Cal 39, with several 29's in attendance. Apart from a barbecue, there were no organized activities and people chatted amiably on the docks or invited each other aboard their boats. It was inspiring to see how many owners had renovated their vessels with ingenious changes to make them comfortable cruising homes. I particularly liked one Cal 34, a slightly larger cousin of our 29, but much roomier, with a separate forepeak double berth, an enclosed head,and a nicely laid out galley. Definitely a classic case of two-foot-itis (or in this case 4 foot-itis as the Cal 34 is just over 33 feet long).
One incident marred the otherwise enjoyable weekend - I slipped on the brand new cedar docks and sprained my left ankle. Thankfully, a kind American woman from a nearby motor yacht saw the fall and hurried over with a huge bag of ice, produced by her onboard ice maker. This and a few other slips and scars led me to comment to one cruiser that I would probably be a multiple amputee by the time we reached Mexico!

I sailed Ladybug back from Thetis Island, dropping Rani off at Maple Bay for her last week of work, and returned to the marina to wrap up a few things. On July 31 Rani and I had a farewell 'open boat' on Ladybug and said goodbye to friends in Victoria with wine and snacks,departing once again for Maple Bay the next morning. I will miss my neighbors, Mary the gardener, with her little house boat, and John - a spry older Brit on an English-built ocean cruiser. Jim, the owner of Hidden Harbour marina, presented me with a Hidden Harbour burgee (flag) to fly from the spreaders in Ladybug's travels.

On the way to Oak Bay, I finished off the solar panel and charger installation that had occupied me during the last days at the marina, and collected a few friends for the sail to Sidney. We polished off the remnants of food from the 'open boat'as well as a few bottles of vino and chatted about life and sailing and psychology (2 of my guests were working on their PhD's in his area). It was another slow sail with light, mainly easterly winds and we only made Sidney around 8pm.
Last night (Aug 2) was Rani's going away party thrown by her friends at work. Loads of people showed up at the Pioneer House restaurant where, despite it being a steak house, vegetarian Rani was able to find a tasty Mexican entree. Rani's co-workers are a great bunch of people and I know she will miss them. They made me feel welcome, too, despite me being the cause for Rani's departure!

We haul out on Tuesday to put on copper bottom paint, service the outboard, and repair a few dings in the hull.
Posted by Chris Bennett at 9:52 AM No comments: