A night sail on the way south to La Paz

This post is for Jamie Orr, who likes to occasionally see something about sailing on a sailing blog...

The wind was light in the anchorage at Agua Verde for much of the day. It was not until about 3 pm that a steady wind began to ruffle the water. We were expecting strong northerlies the next day and decided that rather than do all our sailing in rough downwind conditions, we would leave with a lighter south westerly breeze and sail through the evening. There was a near full moon rising around 8:30 pm that should give us some help in navigating the San Jose channel and finding a suitable anchorage. We were also familiar with the anchorages en route and with our newly functioning radar and some saved GPS waypoints, should be able to find our way in without too much difficulty.


We sailed out the anchor and laid a course for the north west edge of Marcial reef, about 3 miles off shore. We set up our Monitor wind vane to steer us on a broad reach as gusts of westerly wind from the cliffs at Marcial point blew us out of the bay. Dark comes quickly and decisively in mid December and we were soon navigating by way points because a heavy cloud cover and no moon made it impossible to see even the nearby mountains of the Sierra Giganta. Rounding the reef, we turned onto a beam reach and with the vane steering and a reef in the main to cope with gusts out of the mountain valleys, we headed for the entrance to San Jose channel.

Rani navigated on this passage, as she usually does, and used the radar and GPS to keep us on a rhumbline aimed at the middle of the channel. The moon rose behind a cloud-torn sky revealing the faint outlines of islands to seaward, and soon the flashing light on little San Diego island provided comforting confirmation of our electronic bearings. We passed the anchorage at Los Gatos where we could see the anchor light of a sailboat, possibly that of our friends on Southern Cross who had left Agua Verde earlier in the day.

The wind began to increase and we had 2 reefs in the main before we reached the north end of the channel. It was lovely steady sailing with the wind blowing off the land and only a small underlying swell to roll us around. The vane was able to cope with conditions such as these, so long as we made sure to reduce sail and keep the helm balanced during the gusts.

The San Jose channel is usually windier than the surrounding waters due to funneling of the northerly winds prevalent in the winter. However, with the wind in the south west coming over the steep mountains that line the Baja side of the channel, the wind actually became lighter and somewhat fluky in the channel. We decided to favour the outside of the channel and ran over to Isla San Jose to try to find a clear wind. Rani was nervous about getting too close to the sandy spits that project into the channel from the island, but we soon picked up the lighthouse on the more northerly projection and stayed about a quarter to a half mile off shore.

We debated tucking in behind the sand spit, but decided that it would offer no shelter from the westerly swell and instead aimed for San Evaristo on the mainland a few miles further south. The wind died down off Evaristo and we downed sails and motored into the anchorage around 1:30 in the morning. There were 4 boats in the north lobe and 2 in the main anchorage, where we dropped the hook off the beach and after ensuring we were well set collapsed in the V-berth after a lovely 45 mile sail.

We were anchored off the pristine crescent of sand known amongst cruisers as 'the hook' at isla San Fransisco in the Sea of Cortez when we saw a sail boat approaching. There was something familiar about her, and as she drew nearer, her owner hailed us, asking if we were a Coast 34. It turned out that his boat, Time Piece, was also a Coast, although different enough to my eye that I could not immediately identify her.

Owned by John Spicher, Time Piece was recently arrived in Mexico from Anacortes, Washington. John has lived on board her for a decade in Shilshole, Washington. Time Piece came down in this year's Baja Ha Ha cruising rally, taking first place honours in her division because she sailed the entire course (only 7 boats out of 162 entries did so this year).

We went on board Time Piece the next morning and over coffee, chatted with John about his boat and experiences. He revealed that the boat was not one of the production Coast 34s that were built in the Vancouver, Canada area since the early 1980's. Instead she is a custom hull, built to Graham Shannon's design by a Port Alberni shipwright. John had a binder that the builder, Jack Klock, had put together to document the blood, sweat, and tears that went into the boat. Jack put in 12,500 hours of labour over a period of 7 years, launching her in 1990. She was built with a full keel (an option specified by the designer) and has raised cabin sides, a lower deck, wider beam (12 feet!), and much higher bulwarks than the production Coast 34s. She also weighs in at a beefy 26,000 lbs, nearly 10,000 lbs heavier than the specified weight. This is a result of her massive construction, with substantial fibreglass layup over a full airex foam core.
The finish work inside is on a par with the best Taiwanese boats, with solid Burmese teak, milled by the builder, employed throughout. Her layout is similar to the production Coast 34, except for the engine placement being slightly further aft and the galley, which retains the angled sink of the original plans. Some bulkheads have also been moved a few inches and extra collision bulkheads installed.


One of the nicest things about building your own boat is that you can do things in a way that is more labour intensive, but results in a better solution than a production boatyard can afford. Time Piece has a number of novel features including water tanks that are built directly into the keel area (getting the weight down low where it acts as ballast) and a unique plumbing system that runs all grey and black water to aft tanks behind the engine. This eliminates all discharge through-hulls below the waterline. She has only 3 below waterline fittings - one raw water intake shared by the engine, water maker, and saltwater pumps, the propellor shaft, and the depth sounder transducer. Even the head is flushed from re-used sink water.


John is obviously satisfied with his boat. She meets his criteria for a blue water passage maker that can be handled by one and has proved to be a practical live-aboard. 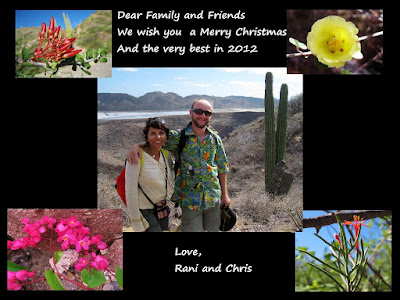 After working on the boat projects for several weeks in Guaymas, Sonora, we set off sailing on a lovely beam reach across the Sea of Cortez to the Baja east coast.  The last few miles were the best as some dolphins joined us in the morning light. They swam in front and around Ladybug, twisting their bodies as they whizzed by to make eye contact with me as I leaned over the bow pulpit.

We arrived at one of our favourite anchorages, San Juanico, and were soon swapping stories with friends from the past on s/v Hotspur. That night we were invited for mouth watering pizza and our first margaritas on S/V Just a Minute.

That was an auspicious start to three weeks of near perfect sailing down the coast towards La Paz, anchoring at some familiar anchorages on the coast and the islands nearby. On Isla Carmen we sat out a northerly blow for 5 days in Puerto Ballandra and made new friends with other stormbound sailors.Since it was still possible to row ashore, we set out on exploratory hikes across the island to find bighorn sheep and new vistas from the scrubby hilltops. We did catch a brief glimpse of a sheep disappearing over a rock face thanks to the eagle-eyed Steve of s/v Corvidae.I ran down the steep gravelly switch back to try and get a photo for the blog but the creature just vanished. Maybe we had a collective hallucination!You can, however, see us in a photo taken from the top of that ridge as we featured it on our Christmas card.The view below of Salinas Bay with it's white crescent beach and giant rectangular salt pans framed by reddish brown volcanic cones was stunning.


Exploring new anchorages is always a challenge as the seasonal northerly wind dictates our course for the night. However, we were fortunate to experience a few moderately calm days and sailed Ladybug into new bays. Hiking into new territory was a novel experience and we found many treasures; flowers, shells and beached skeletons, including a mummified wild cat.


This wild cat, maybe a lynx, was probably shot ( see bullet hole above left eye) and ran off the cliff onto a shingle beach.


Thanks to the recent rain, the flowers were spectacular in the arroyos. Vines of bright yellow morning glories and pretty pink San Miguels clambered over rocks and shrubs and purple nightshade flowers stretched out like bats' wings. The plateaus above were decked out for Christmas with the luscious red berries of the boxwoods competing in the colour contest with the scarlet chilli-like flowers of the coral plant.

Apologies for the silence.

We are in Puerto Escondido on the Baja Peninsula en route to La Paz where we will spend Christmas. It took two weeks to get Ladybug ready for the water because of additional projects that  needed completion  before we leave for the Marquesas.


The winds have been strong and from the north about half the time, so we have spent quite a lot of time hiding out in secure anchorages along the way, including 4 days in Puerto Balandra, where we had some excellent hiking with some new cruising friends who were also storm-bound. On one hike we crossed the island to a lookout over Salinas Bay and Steve pointed out a bighorn sheep as it disappeared down the mountain. We saw what looked like a hunting blind made of black plastic and tarp on a steep slope with a great view over the valley. Whether it was used by hunters or naturalists, one can only guess.

Posted by Chris Bennett at 8:17 AM No comments: